Dre Ko Malolo: Malolo is the isand where the sun comes to rest

Fiji has long been known as a tourist destination, a place where the weary traveller can rest, relax, and be rejuvenated by sun, sea, and hospitality. But long before its reputation as a tourist destination was cemented, indigenous Fijians would turn their eyes to the west each afternoon, looking to where the sun appeared to rest upon Malolo Island.

Indigenous Fijians believe that Malolo was an island especially created by the gods where the sun would come and rest after a day of wandering. Every Fijian, irrespective of what island they hail from, knows that at the end of the day, wherever you are in Fiji, the sun will always come to rest on Malolo Island.

Katonimana: 3,500 years of peace and prosperity

Settlement in Fiji stretches back almost three and a half thousand years ago, when Melanesian voyagers sailed west and settled the Pacific islands of Vanuatu, New Caledonia, and Fiji. Legend has it that the great seafaring warrior Chief Lutanasobasoba sailed his giant double-hulled canoe Kaunitoni south from Egypt in search of bountiful seas and rich lands where his people could call home.

Alongside families, warriors, and skilled craftsmen, the Kaunitoni carried something truly precious: the Katanimana, the Box of Blessings. Rough seas around Malolo Island caused the Katonimana to be lost to the ocean. To this day it remains buried in the seabed, bringing peace, prosperity, and good fortune to all of Fiji.

The first Europeans came across the prosperous Fiji Islands in 1643, completely by accident. Abel Tasman stumbled across Fiji on his way to discovering the Great Southern Continent, and James Cook sailed through in 1774 in search of the same place. From there, many British sailors settled and traded among the Fijian islands, bringing sandalwood and sea cucumber to the rest of the world.

Amidst a climate of social unrest among and between indigenous Fijians, British settlors, and the descendants of indentured Indian plantation workers, which ebbed and flowed throughout the 19th, 20th, and now 21st centuries, in 1872 the Nadroga chief Ratu Kini sold the uninhabited island of Malolo Lailai to John Thomson for cotton planting, a mere two years before British Governor Sir Aurthur Gordon banned the sale of Fijian land to non-Fijians in an effort to protect the local indigenous population. After some time as a cotton, coconut, and copra plantation, the island was sold in the 1960s to Richard “Dick” Smith, Sir Ian MacFarlane, and Reginald Raffe, who parted ways in the early 1970s to develop their own parts of the island. It was then that Lomani Island Resort was first developed as a lush adults-only resort where travellers could come to seek adventure, relaxation, and some time away from the world. 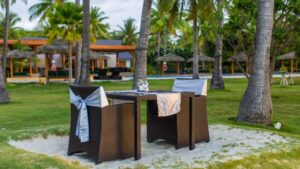 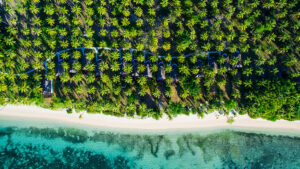 Travel in the time of Coronavirus 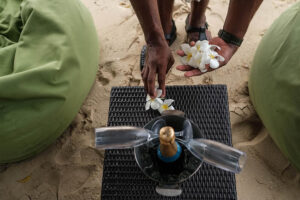 Show them you love them this Valentines Day Book in January or Febuary & get a FREE Romance Package upgrade

*5-night minimum stay is required to redeem this offer.

Sign up to Experience affordable luxury at Lomani Island Resort. Designed just for couples it is the perfect place to explore with your special someone…